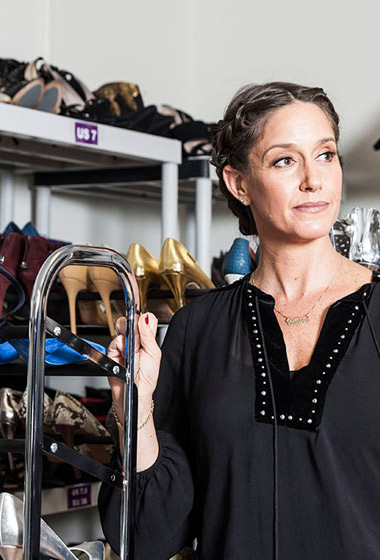 Erin Hirsh is one of the most sought after and artistically diverse costume designers in the entertainment industry. Having worked with a multitude of celebrities, her resume spans from Ellen De Generes and Rihanna to critically acclaimed directors David Lynch and Spike Jonze. She is best known for executing conceptual designs with impeccable craftsmanship.

Currently Erin is the head costume designer behind NBC’s Emmy Award winning television show The Voice where she has earned herself two Emmy nominations. Prior to her career in fashion Erin worked as a professional dancer in New York. Her experience as a performer was instrumental in discovering her talent for costume design and lends itself to meet the unique demands of dressing artists for the stage. She has designed multiple world tours and award show costumes for Kanye West, Rhianna, Janelle Monae, and Gnarls Barkley.

One of her most recognizable pieces of work was a design collaboration in conjunction with Kanye West and NASA engineers to create the elaborate “light-up jacket” and glasses worn during Kanye’s Grammy performance of “Stronger.” Critically acclaimed by the fashion community as well as the technology industry, the jacket was revered as ground breaking, and currently resides as part of the permanent collection of the Grammy Museum.

In addition to being an innovative costume designer Erin is often brought on as creative consultant to help artists realize their vision from staging concepts to video treatments and album packaging.

Erin doesn’t confine herself to any particular area of art or fashion. She prides herself on being able to take on any creative challenge, whether it’s designing for pop stars or hired to consult on projects in the realm of visual art, theater, or dance.