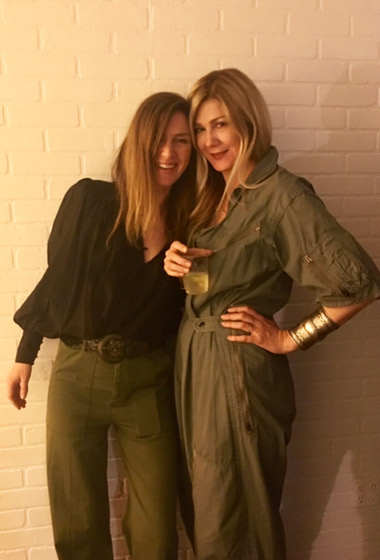 Irish sisters Giolliosa & Natalie Fuller are both working Costume Designers & Fashion Stylists, based in Los Angeles Ca. Giolliosa attended the prestigious Central Saint Martins College of Art in London, where she studied in Photography & Fashion Design. Her award winning fashion photography was published in the “British Journal of Photography.” Also, while at Saint Martins, Natalie graduated with a degree in Environmental & Fashion Design. She won a “Gen Art Fresh Face” nod and her designs were featured in British Vogue.  Both sisters having found great success as individuals decided to join forces to see what they could accomplish as a team and SisterStyling was born!

Having the privilege of living and working throughout Europe and the U.S., the sisters have combined their considerable talents and have taken on a fearless approach to style and design, making them an unstoppable force.

Their careers encompass everything from high-profile celebrities, advertising campaigns, music videos, high end fashion editorial shoots, TV & commercials and red carpet events as well as art directing & brand consulting. But, the best part is, they get to work and create together almost everyday, “We share a joint dream.”

SisterStyling’s work has been featured in GQ, Esquire, Hunger Magazine, L.A. Confidential, InStyle, Ocean Drive and Gotham among others. They have a long list of commercial & costume design credits such as Kiehl’s, Target, AT&T, Moët & Chandon, Volkswagen, Geico, NBA and Smashbox to name a few.Launching their first L.A. based clothing line “Sorella” in 2015, an internationally recognized label, where all the designing, buying and constructing takes place locally in Downtown L.A., with their three adorable dogs occasionally offering creative input!. “Sorella” clothes evoke a bohemian elegance that is bold, romantic, and highly wearable. It’s for a woman on the go. “Women who want to work, live and play in their clothes.”  Their label has been spotted on A-list celebrities, Halle Berry, Nikki Reed, Taraji P. Henson, Julia Stiles, Kourtney Kardashian, Pixie Lott, Ariel Winter and Carrie Underwood to mention a few as well as featured in top fashion editorial publications.